A brief glimpse of Life in Laos
​

​I found a small house, Laos style with lots of charm, I’m living there since the beginning of November.
There’s very little vocational training in Laos so the quality of plumbing, electricity, wood-working, painting, etc is very poor, unless you find someone who is naturally talented or has spent time in a maintenance department of a foreign-managed company. For the last three weeks of October I guided the work to complete the plumbing, electricity and painting; at last the essential things now work!
The owners agreed to spend my rent money, $750 for 6 months in advance, not expensive even by Vientiane standards, to do the renovations, install air-conditioning and a hot water system for the shower. I bought beds, cupboards, mattresses, sheets, towels, blankets, chairs, tables, TV, fridge and a washing machine; all movable equipment and furnishings that I can take with me if, after a while, I find major problems with living there.
On the ground floor there’s a bedroom with an attached bathroom which also serves to house the washing machine, a small living/dining area and a kitchen. Up the rickety wooden stairs there are two terraces outside with tables and chairs to enjoy cold beers while watching the sunset through the coconut trees in the gardens around. Inside there’s a very big bedroom with windows on three sides and an adjoining bathroom, very sunny, like my apartment in Paris. 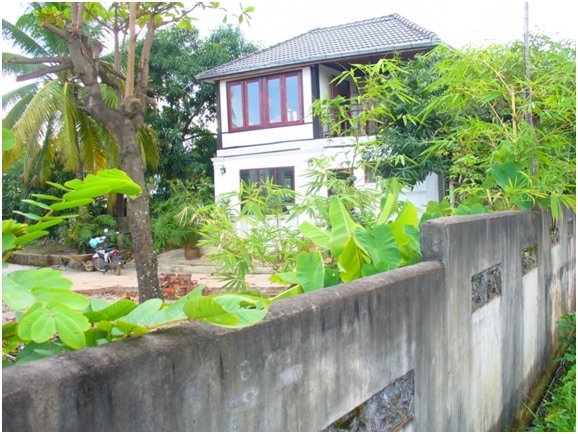 ​The family which is renting me the house and the students I’m sponsoring helped me move in.
It’s a funny experience to be living in a house again, almost in the countryside after spending the past 37 years living in an apartment in the Centre of Paris. Also, it’s a funny experience setting-up house again  choosing curtains, furniture and shopping for sheets, towels, cups, plates, glasses, etc. I feel very “comfortable” here and happy with my new life, career and home shared between Vientiane and Paris.
Life in the country. Although my house is less than 5 minutes by scooter from Lane Xang, the main street and “Champs Elysees” of  Vientiane, it’s also life in the countryside with the access road in red dusty earth which quickly turns to sticky mud in the rain.
Morning starts about 5.30 with the cockerels in my garden exchanging “cock-a-doodle-doos” from 100’s of other cocks in the area (cock fighting is still prevalent so many families keep fighting cocks). The first motor bike revs up and leaves a few minutes later after which it’s the chanting of monks at the nearby Temple, zoom, zoom, zoom, zoom, zom, zom, zom. At 6.15 my neighbor brushes his driveway and feeds the cocks and hens creating high decibel cackle, cackle, cackles from the gaggle of birds after which the dogs join in to add the Double-Bass woof, wuf, wuf, woof… to complete the orchestra……in addition there’s my neighbor on the other side, who I think sleeps with his frogs and dogs because he spends ten minutes every morning trying to dislodge some of them from his hairy throat ……evidently, I get up early, about 6.30.
I was brought up on a hill farm in the Yorkshire Dales with sheep, hens, horses…so it’s almost back to childhood days with an Asian flavor! Sticky rice and noodle soup instead of mashed potatoes and Yorkshire pudding!
Afternoon between 1.30 and 3.00 is calm, it’s a great time to take a siesta, I should join the “siesta club”, but Mondays and Fridays I play golf from 1.30 to 5.00, most other days I work straight through the day at the Lao-American College.
At the end of the afternoon, about 10 children aging from 2 to 10 years old often accumulate in the garden which I share with the family renting me the house. They’re a happy bunch shouting and playing, soon joined by neighboring children and accompanied by the family’s 15 chickens, cocks and hens, 3 dogs, 2 cats all circulating freely. With all this mixture of children and animals I’ve never heard an argument or fight between them neither the children nor the animals…that’s the ambience which I like here in Laos.
In the evening, families have dinner around 7 pm, some stay outside chatting and laughing in laud voices and drinking beer until 10 pm after which it is relatively quiet. There’s a curfew at midnight, not forcefully applied but well respected by the residents, so restaurants, bars, and discos stop at midnight except a few hotels and clubs catering for international clients which are authorized to stay open until 3 am. Cable International TV is available also Internet but access is very, very slow.
Night is calm except for the noise of animals and insects usually found in the Tropics and a few dogs.

The family which own my house is composed of grandparents and 8 children (all married with several children) 3 of which live in the family house. 2 sons with their wives and families have recently returned from Australia and are starting to rebuild their lives here. The Government is providing incentives to attract back to Laos those living abroad since the Revolution in 1975.
A Laos family has many children; they are the parents “retirement insurance” as Laos tradition is for children to look after their parents when they’re old. One or more children are designated to live in the family home with the parents to clean, shop, feed and provide medical assistance. The other children visit often so the ambiance at the family home on Sundays is very festive with meals taken together, music and many grand children running around.
To survive in Laos one must enjoy people, children, family life, have a high tolerance level and smile! I usually play golf on Sundays! Soon, the grandparents will be moving out with their children and animals to live on a farm about 30 minutes away, I’m sure to go visit them from time to time.

The family house is on two floors each of 200m² situated in land plot of 2000m² which includes my house too. The roof is undulated galvanized tin, lower walls of brick and upper walls of plaster board reinforced with long strips of hard wood. Windows have shutters, mosquito blinds but no glass. Inside upstairs are big spacious bedrooms where several people sleep on bamboo mats laid on the floor, bathrooms are primitive but clean.  Downstairs the kitchen is the main attraction, with plenty of room for cooking often open to the outside, using charcoal barbeque type stoves.
Outside there are 2 water wells with natural spring water, but unused as water from the town source is readily available and cheap. There are coconut, banana other pretty flowering trees in the garden, but the chickens eat all the young trees I‘ve planted…it’s time to eat the chickens… I shall be glad to see them go to the farm with the Grandparents!
​
The best season is now, from October through March with temperatures from 20° to 30° during the day and down to 15° at night. From April to June it can get over 40° and one must have air conditioning in order to sleep. From July to October it’s the rainy season, strong rain almost every day but not all the time and the rain is warm so not too discomforting when one is under a good rain cape.

Background:
Modern-day Laos has its roots in the ancient Lao kingdom of Lan Xang, established in the 14th Century under King FA NGUM. For 300 years Lan Xang had influence reaching into present-day Cambodia and Thailand, as well as over all of what is now Laos. After centuries of gradual decline, Laos came under the domination of Siam (Thailand) from the late 18th century until the late 19th century when it became part of French Indochina. The Franco-Siamese Treaty of 1907 defined the current Lao border with Thailand. In 1975, the Communist Pathet Lao took control of the government ending a six-century-old monarchy and instituting a strict socialist regime closely aligned to Vietnam. A gradual return to private enterprise and the liberalization of foreign investment laws began in 1988. Laos became a member of ASEAN in 1997.