​One of the student I’m sponsoring, Chan, graduated from Ecole Polytechnique in July 2013.
His family, several of whom came to the graduation ceremony, and I, are very proud of him. 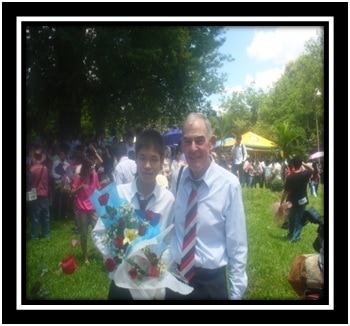 ​He’s found a job, thanks to the first Vientiane Career Fair which I organized with students from Lao-American College and learning to speak English.
His first day in a job on September 12th was a big occasion, very nervous as you can imagine. He’s working in a Tourism Agency having to use his English and the Internet the whole day long, it will be very good for him.

He works from 8:30am to 5:00pm then goes to Lao-American College to continue his studies from 5:30pm till 8:30pm…….a long day…just like I had when I was his age, working full time in Gildersome, up in Yorkshire, then going to school at Leeds College of Commerce at night from 6pm until 9pm; so no pity from me, but lots of encouragement and understanding!

March 2014-“Trader” Chan
After working in a tourist agency, then 10 months working at Mercure Hotel, he decided it was time for another change so he got a job with the Banque Franco Laos (BFL) in customer sales.
He works from 8:30 to 5pm then continues his studies for his BA in Business at Lao-American College from 5:30 to 8:30pm.
His salary is $300 per month which is quite good for Laos, he’s intelligent and found a way to double his salary by trading Lao Kip for Thailand Bhat. There’s a big demand for Bhat from the hi-tech shops which need Bhat to buy IT products from Thailand but the Lao Government does not allow exchanging Kip for Bhat over the counter. He’s found a loop-hole by using his ATM card to change Kip to Bhat inside his account, (he’s limited to $250 per transaction and does this 4 times a day to reach the account limit per day of $1000). He exchanges Kip for Bhat at the going bank exchange rate then draws out the Baht in cash over the counter to resell to IT shop managers at the black market rate 2% to 4% higher. (4% x $1000=$40 profit),  He can do this easily 3 times per week so theoretically by the end of the month he’s made as much profit trading as he gets as salary. Then he had the bright idea of using my account and his cousins account in order to multiply by 3 his gains, he did this for a few weeks. But sometimes the exchange rate moves in the wrong direction and right now the Bhat is falling because of the political problems in Thailand so his scheme is not working. For a while he was highly motivated, sitting up in bed with his lap-top till 4am learning Forex trading techniques on You Tube!
After 8 months at the bank he’s decided that he does not like the banking mentality, he prefers a more “people-contact” job rather than banking, so he’s stopped working at BFL, taking a break for December and January to concentrate on his studies, but from February 2014 he has started working again at the Mercure Hotel, he likes the people contact (his interests range from IT, graphic design, hotel management, restaurants, accounting….)
He’s now 23 years old, I’m proud of him, he has made great progress since I met him 4 years ago from being a shy country kid, weighing 45 kilos, the 16th child in his family, to being a currency trader, and speaking English fluently. He no longer needs me to support him, he can now look after me!