​The Rains stretch from April to the end of October, with very, very heavy rain and then 40° C scorching sun. Sometimes it rains for two days without stopping. The thunder and lightning are so strong that the house shakes in fright.

During this season there are less mosquitoes but lots of ants and termites who like to take refuge in the house. The first thing I did on returning from Europe at the beginning of September was to spray 3 cans of anti-bug gas inside and outside the house......I think the termites are enjoying the woodwork, it must taste good because they're bringing their families and friends to partake of the feast......they can even eat concrete, amazing! 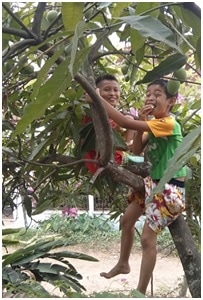 My garden is like a jungle, you can almost see the banana trees grow; mine have grown over 2 meters in the 2 months that I've been in Europe. Also they breed-like-rabbits as each tree sprouts two new trees from its base before it reaches two meters in height. But no bananas, plenty of coconuts but no bananas! I wonder why! Once the dry season arrives I shall have to cull some of the over-growth and research why I don’t have any bananas.
My bamboo trees have decided to grow new shoots and branches...they are amazing as once a new shoot breaks through the ground it grows, you can almost see it grow, about a meter a week until it reaches 2-3 meters then slows down.
It's the mango season too, so I pick a couple of mangos off my tree each morning for breakfast.
​
My neighbour’s kids, Nicky and Bey (12 years old) bring knives, plates of sugar & spices to have a pick-nick in the tree, they’re so smiling and nice so I don’t chase them off. 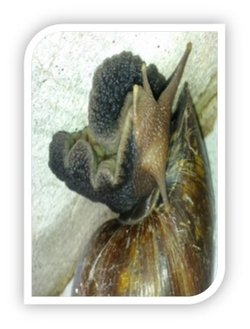 ​
​​And there are giant snails some as big as your hand, climbing everywhere….I should export them to France! 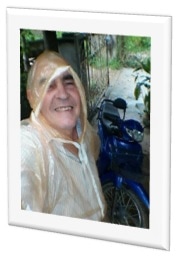 ​​Even in the rainy season life goes on.

I wear a plastic rain cape when I’m on my scooter … it looks like a giant condom which covers everything…and its rose colored…I must at least change the color!
​May, 2014. At last a rain storm, and what a storm, starting about 4am (April 29th) and lasting through to 10am…the whole house shook with the thunder and the rains came pouring down…..and into the downstairs bedroom and bathroom as the rain was accompanied by strong winds which drove the rain on to the terrace upstairs, which is not completely watertight. The terrace is made of teak planks but not of uniform width, so there is a gap of one centimetre or more between the planks which allows water to run down through the false ceiling to the next floor.
It’s the first rain storm in over 6 months and we really needed the water and the reduction in temperature which comes with it.
It’s been the warmest season since anyone can remember, over 40° during the day for weeks and dropping to 30° at night, almost unbreathable and it’s difficult to have the energy to do anything unless you’re in an air conditioned environment.
Drains on the main roads around Vientiane cannot cope with the downpours in spite of the roads being in concrete and just a few months old.
Take it easy….”bor pen nyang” no problem! if you’re on a motor bike then hide in a bar, take a beer Lao, until the rain stops!
The temperature dropped to 22° from over 40° overnight, now the sun is out drying-up the water damage and I’m mopping-up the downstairs bedroom, bathroom, terrace and stairs.
It’s a good opportunity to wash away the film of red dust which gets in everywhere.
The house is sort of thrown-together with any left-overs recovered from other building sites (there are seven different tile designs in the bathroom downstairs!)
Raining CATS
There’s a 50 centimetre space between the upstairs teak plank floor and the down stairs false ceiling of my house which has never been sealed outside around the house….you think that’s no problem!
Well, when it rains the wind blows water into the gap and wets the downstairs ceiling; when it’s cold the wind blows the cold air under the floorboards of the bedroom and terrace.
Recently the local cats found the space and decided to make their home under the terrace.….there must be 4 or 5 tabby cats eating and living there. That was ok until the local “Tom” cats started to “screw” around and fight at 3am! That was too much, so I decided to put an end to their capers and succeeded in blocking their access with plastic water bottles and a bag of pebbles and a catapult at the ready for use as target practice.