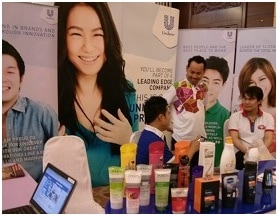 ​July 2012- 2nd Annual Vientiane Career Fair
It was great that our project “Career Fair” won the Silver Medal in Phnom Penh in the Business Plan competition, but we had a real business to run. So May and June were spent negotiating with companies, finding a location, floor plans, printing brochures, posters, flyers and implementing a media plan on the radio, SMS and Facebook to publicise the event to the Laos student population.

​We succeded in having 30 companies sponsor the event, attracted over 1500 students to the Vientiane Plaza Hotel for the two day  fair, covered all our costs and even made a small profit. 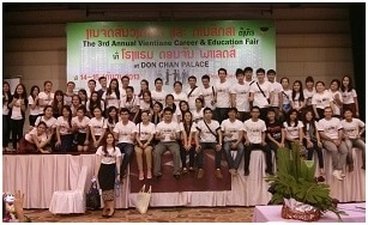 ​December 2013-3rd Annual Vientiane Career Fair
We had over 50 companies and Educational establishments from Malaya, Singapore, UK, France, Germany, USA and China renting booths and financing the event. We used Facebook to generate traffic and had about 2000 visitors.
​
It’s hard work organizing the Career Fair, as I don’t have any qualified staff, they are all unskilled student volunteers. I plan, delegate, train and control….. then often have to do it myself…they are happy, laid-back and want to keep me smiling so they don’t tell me any bad news or that they have not done what they were supposed to so I only find out at the last minute ! I’ve been looking for teachers at Lao-American College and at the National University of Laos to take over but all in vain. 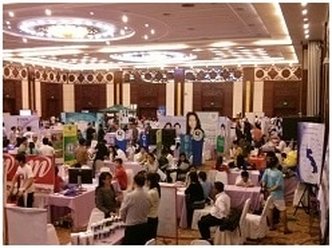 ​June 2014- 4th Annual Vientiane Career Fair & AIESEC
Three volunteers from the AIESEC international student’s organization, all about 25 years old, Kate an American, Emilien English-Belgian and David an Australian, arrived in Laos about a year ago to set-up a Laos chapter.

I suggested that they make the Lao-American College their base and share my office. They have to make their own financial support for their living and activities as they receive very little financing from the AIESEC parent group.

The Annual Vientiane Career Fair is now well established, makes a financial surplus but is getting too big for me to organize on my own. So the timing was great for me to hand it over to the AIESEC volunteers to run and keep the surplus to finance their other activities.
OOuff…….what a relief, as it really was a big job for me to do alone with many willing but inexperienced student volunteers.

The AIESEC volunteers did a great job organizing the Career Fair and adding a “forum” to discuss Laos’ entry into the South-East Asia Economic Union in 2015. The also increased the number of free workshops for student visitors to learn how to write a CV and practice interviewing techniques.

I had very little work to do fortunately, they organized everything with a small amount of my guidance.

​I’m very happy that the 3 volunteers from AIESEC student organisation can take over from me.
​I’ve many projects to get started such as a Vocational Education and Training Career Fair to encourage the development of an Apprenticeship system like we have in England, Germany, France, etc to enrol students from 14 years old in vocational training schools where they can go to school and have a job to receive practical training and a little salary.
Vocational training is really needed in Laos, many companies are willing to sponsor and finance such programs but the Administration does not reach-out enough to businesses to implicate them in the educational process.

There's a lot of work to get projects off the ground and not many volunteers to help.
With a Pacemaker, two metal hips and chronic Asthma.....maybe I should look after my health and play more golf ....but there’s so much  needed and solutions to create and implement that I’ll keep looking for fellow volunteers to help expand the impact we’ve started......