Health-wise I can't complain, two metal hips, slightly high blood pressure and my trusty Ventolin, about 10 times a day, keeping my chronic asthma in check for over 60 years.
Health care in Laos is very poor, Vientiane has modern hospitals and equipment but the training of doctors, nurses, cleaning staff leaves a lot to be desired.  There are some health centers in rural areas but very poorly equipped and staffed. Private Clinics are springing-up everywhere often owned by Vietnamese offering better advice and care ...at a price. For any serious problems most people try to go over the border into Thailand (30 minutes from Vientiane) which has a good reputation for health care although expensive.
So in Paris each Summer I do the usual blood pressure, heart and blood bio check-ups. This time I decided to consult an Asthma specialist but all the new medicines I tried made me worse, with severe stomach pains, seeing double …..she almost finished me off!
Best medicine I have found during the 60 years that I have had chronic Asthma is  playing sports; now it’s golf which makes me walk for several hours twice a week, I try to go swimming once a week but it’s a bit boring, biking is good but it’s too hot then rainy for most of the year in Vientiane.
(In case this information may help other Asthma sufferers, since Summer 2015, I take a dose of SYMBICORT at night and morning which amazingly has reduced the use of Ventolin to almost nothing, just a squirt sometimes as required). 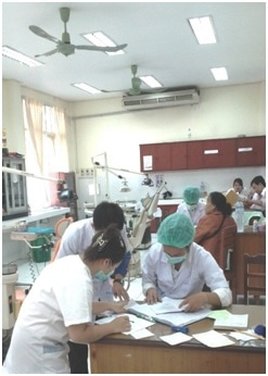 ​Visit to the Dentist
In November 2012 I had toothache for over a week so eventually plucked up courage to go to the Dental Hospital and Training Center. It’s a modern hospital with equipment donated by many NGO’s.
I paid €0.90 for inspection by a dentist, €5.0 for an X-ray, then back to the dentist who interpreted the results as probably needing extraction, but did not seem sure…..me neither, but they sent me to the Extraction room where two young 18 years old students, (they looked like 15 years old) dressed in white gowns and wearing face-masks stood hovering over me, one with a syringe and the other with his pliers, …..as if they were about to change a motor bike tire!
When they asked me which tooth was to be pulled I got more worried and asked to see their Prof. He came dressed in casual clothes and when I used my Ventolin inhaler that I use constantly for my Asthma, he got worried and decided I should come back in four days time with someone to accompany me. In the meantime he gave me antibiotics and pain killers.
After 1 day taking antibiotics the pain disappeared so I finished off the week on antibiotics and since then no more toothache….it was probably an infection under the tooth which caused the pain…..and no more Dental Hospital!
I’m sure of their good dental skills because Lao children and people have mouths full of white, shiny teeth!
​Heart Care
I spend 2 months in Europe, Amsterdam, Bruxelles and Paris in July & August, but in 2014 I stayed 6 weeks more as I had a health scare while playing golf at Chantilly just outside of Paris in August... While on the putting green everything started to dizzy around me and I was carried off to the Club House. Eventual diagnosis was an irregular heart-beat, it had gone down to 30 beats per minute.
I was treated urgently at Pitié-Salpétrière Hospital in Paris where they installed a “Pacemaker” which automatically reacts when necessary to keep my heart beating above 60 per minute.
Back in Laos since October I've reduced my work load at the Lao-American College to give me more time to get fit and stay out of the sun.
There’s a well funded Hospital in Vientiane with a heart centre but the closest Heart Centre with equipment to monitor my Pacemaker is in Hanoi, so I’ve decided to just return to Paris each Summer for an annual check-up, hopefully Buddha will look after me for the rest of the year in Laos!

Happy to say that by December 2014, I was back golfing again with my Pacemaker chipping away merrily.